This year marks 20 years since the Rwandan genocide began and this week people are remembering their experiences in the country undergoing a mass killing of citizens.

Annie Thomas was a new foreign correspondent for AFP and Rachel worked for MSF.

It was six years ago that I was in Rwanda on April 7, their national day of remembering.

Here is what I wrote that day on my blog Taking You Closer:

14 years ago today was the beginning of the genocide in Rwanda. Hatred incited by propaganda stirred years of discontent and the feeling of inequality. When the violence started it left hundreds of thousands of people dead in 100 days.

I have seen movies, read Shake Hands with the Devil and Sunday by the Pool in Kigali, and heard lectures by Romeo Dallaire. But it didn’t prepare me for the feeling of walking among people in a country where just over a decade ago they were killing each other. It wasn’t a feeling of fear, but that of curiosity. I want to know how each person I meet was affected; I want to ask about scars I see. I want to understand how it can happen.

There is much hope for the future though because Rwandans and most of the world wants to understand too. 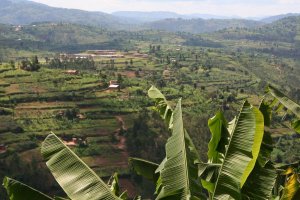 Today, memorial services were held at sites all over the country. On the trip from Kigali to Butare we passed entire communities walking together to memorial sites, draped in purple and carrying placards that read ‘never again’.

As I walked to the Murambi memorial site, I passed what must have been all the communities in the surrounding area. There were hundreds, if not thousands of people. As I walked along, many of the people, who likely lost loved ones, stopped to shake my hand and thank me for coming.

It was very humbling. Thanking me because I was coming 14 years later to witness what they experienced.

Murambi was a high school, where Tutsi’s had been told to gather, and it is where they were attacked.

Their bodies were preserved with powdered lime so they are still intact. Children sized skeletons with splits in the skulls, adults with missing feet.

There is really not much else to say except, “Never Again” and mean it.